Where do young adults go after they are 18? – Instituto Devolver

Where do young adults go after they are 18?

Turning 18 is a moment of euphoria and anxiety for most young people who dream of achieving independence, but for those who spent their childhood in shelters, the reality is different. The (so longed for) coming of age, for this group of young people, is marked by the concerns and insecurities of those who, more than ever, need to walk on their own two feet.

Today, around 47 thousand children and teenagers live in foster care institutions in Brazil, according to a survey by the National Registry of Fostered Children of the National Council of Justice (CNJ). They are boys and girls who were in a vulnerable situation and were removed from family life for social, emotional or physical integrity reasons. Of this number, only 4.3 thousand are actually available for adoption in the National Adoption Registry (CNA)*, with only 443 of them under eight years of age and above that age the number reaches 3.8 thousand.

Reinsertion to the family of origin or extended family (uncles and grandparents, for example) is always the first option, when this is not possible, referral for adoption is made, which is not always possible.

According to the CNA, there are 46 thousand applicant families registered, as this number is much greater than the number of children available for adoption, it would be expected that all these children would have a home, but the reality is different. Families that find themselves in the adoption queue have their preferences: 10.4% only accept children up to one year old, while those who accept children up to 7 years old the number drops to 6%. The closer to the age of 17, the lower the demand on the part of families.

The desired profile, which is so restricted, makes the waiting time for an adoptive family to be long and many of them end up living up to their 18 years in shelters, when they are forced to leave the institution and pursue their independence.

This was the case with Ulisses, now 42 years old, who lived until he was 13 at Lar do Caminho, and then moved to a republic where he stayed until he was 18 years old. Today, republics, a type of reception service that offers support and subsidized housing, is aimed at young people aged between 18 and 21 in a situation of vulnerability, physically, emotionally and socially, with broken or weakened family ties, in the process of dismissal from host institutions, who have no possibility of returning to the family of origin or placement in a foster family and that do not have the means to self-support.

0“I knew that the aunts weren’t my parents, even because they didn’t give love and affection, but it was a protection that we lose when we leave there… you lose your protective film and find yourself without any direction” comments Ulisses. Prior planning for the dismissal of young people who are of legal age and are required to leave home is provided for by law and is a responsibility of institutions, which hardly manage to truly prepare them to embark on adulthood and face the outside world: “You didn’t know the world was evil, because the world is evil. I usually say that the slap of life is much heavier than being slapped by your parents. And it’s hard to get up,” he adds.

In May of this year, senator Paulo Paim presented a bill (PL 2528) with initiatives to support access to the job market for adolescents and young people in shelters. As they don’t have anyone to support them, work becomes the only option, but getting a job is not so easy. Research shows that the longer people live in a shelter, the less development of these children, increasing the age-grade distortion even further.

Then he was able to start a new stage when he entered college, comparing life to a moving car: “The rearview mirror is your past, where you look to support you, but where you should really look is the windshield, your future.” But it was not always so. During adolescence, he could not accept that some had much and others nothing, as he matured he understood that this would only be his life if he allowed it, and he knew that he had not come into the world to take the place of victim: “Society sees him as a poor thing and sometimes you root that and make it true. That’s where you sink.” Many of the young people who grew up with him ended up taking a different path, getting involved in the world of crime, drugs or getting pregnant at an early age. “This society sees him as an evil person, but he doesn’t go to crime because he thinks it’s cool, but he’s the one who gave him confidence.”

During college, the young people who lived with Ulysses in the republic were also interested in studies, as he became a reference. Bringing an example of someone who had a similar life to these teenagers is important not only to show that it is possible, but to offer a word of comfort from those who have already faced the same thing. “You don’t know who I am, but you were everything I needed to hear” was what Ulysses heard from a girl attending at Lar do Caminho during one of his visits.

Ulisses is one of the young people who came from institutional care and had a happy ending, but we know that this outcome is not the same for everyone. That’s why projects like the Young Social Apprentice, developed by Instituto Devolver, which trains and guides young people in social vulnerability, giving them the opportunity to enter the labor market is so important. 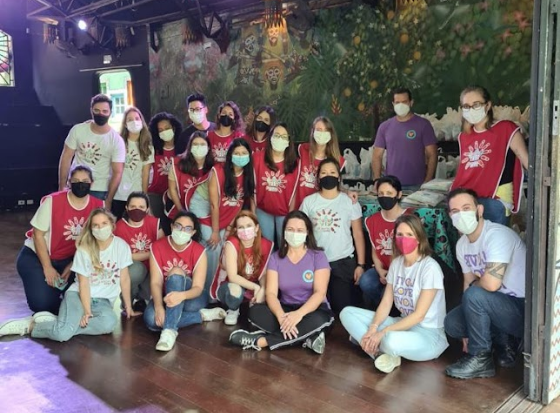